by Not so Skinny Cook
18 Comments 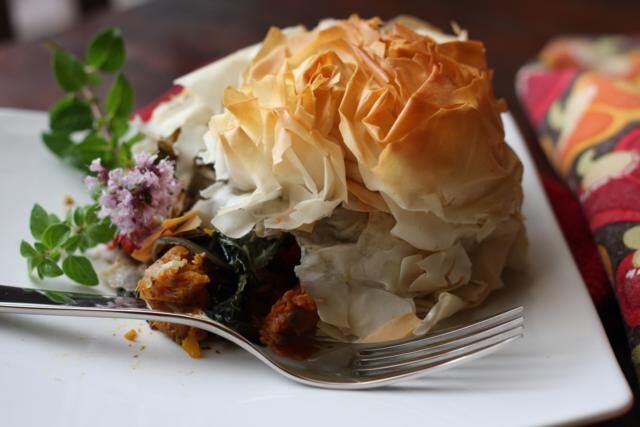 My dearest baby sister is currently dating a very descent guy.  So what on earth would this have to do with the not so skinny cook I hear you say.  Well naturally one doesn’t want to look like a complete hill billy when being introduced to who might be your new brother-in-law.  So I invited the lovely couple over for a Sunday lunch.  Although I made all sorts of traditional Sunday foods like roast chicken and potatoes I also included this as a side dish….  I am however quite sure that this would also suffice as a light lunch when served with a green salad.

The roses are made by shaping sheets of phyllo into roses , don’t worry it is much easier than it looks and will impress your guests endlessly.  Phyllo is quite easy to work with as long as it is brought to room temperature beforehand.  I used olive oil in a spray bottle between the sheets of phyllo thus creating a more healthy version, lower in fat and calories, than when you use butter.  The phyllo was still delish and beautifully brown, and no-one missed the butter.

This can be prepared a day in advanced, just don’t bake once the phyllo roses has been placed on.  Place into your refrigerator and cover loosely with foil to prevent drying out and spoiling.  Bake 1/2 an hour before lunch in a pre-heated oven of 180° c.

So here is how you go about to create this showstopper:

8. To fold a phyllo rose: Take both hands and pull phyllo up in the centre to make a fold.

9. Twist the phyllo around this fold and form a rose.  Place roses on top of the phyllo layer to fit snugly. 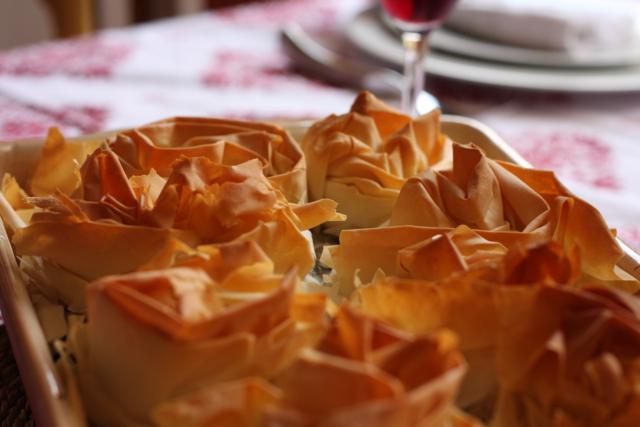 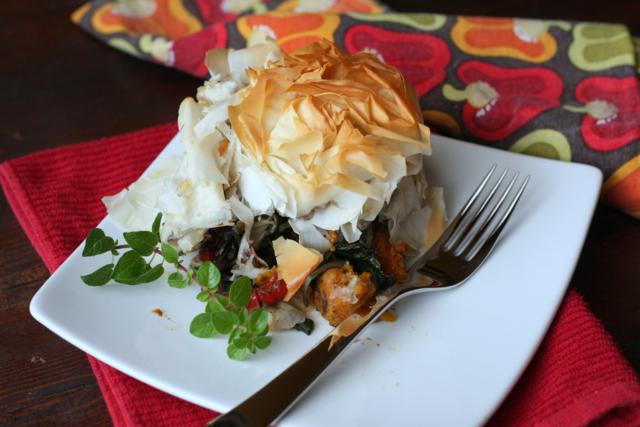 by Not so Skinny Cook
No Comments

Wild Mushroom Risotto and a Reward for the Notsoskinnycook

by Not so Skinny Cook
22 Comments

How pretty and impressive looking! I’m going to bookmark this for a dinner party that we always have in the autumn – it would be perfect (and might impress the neighbour/gourmet cook next door).

Hi I hope you enjoy it!

Your phyllo looks amazing. Great tutorial. I usually get frustrated with phyllo. I think I was getting dry phyllo from the market but I recently got some from Whole Foods and it was easy to work with.

Thank you.I usually buy fresh phyllo from Woolworths. It costs a bit extra but I think it is worth it.

Beauty on a plate, this looks so delectable and I just want to eat it off the screen!

Yummy yummy! Thanks for the step by step pictures of how to fold. Phyllo pastry is pretty cool- there is so much you can do with it!

Glad you liked them!

So beautifully golden brown and crisp! These roasted veggies must be very flavourful.

They are indeed. I love roasted veggies. I could eat them for breakfast every morning

LIKE!LIKE!LIKE!..actually the like button is an understatement…I love..i mean abosolutely LOVE the look and idea…wow…

Now i am blushing…. Thanks for all the compliments….

I imagine anything under phyllo dough would taste good, especially veggies! I love the “roses”, it makes a spectacular presentation!

Yes, isn’t it true that anything under pastry tastes good… 😉